Jillian Janson moved to LA to be an actress and she began performing as a gogo dancer to make a little extra cash. Little did she know how addicting getting naked in front of a crowd would be! Jillian learned pretty quickly that she was a true exhibitionist and that she found her calling the first time she grabbed a pole on stage. Now working as a pornstar, Jillian has become the actress she always wanted to be. But she still loves getting on stage and performing in solo shows, so she is happy to be working with VirtuaGirl. When Jillian isn't on set, she is an avid spin cycle enthusiast. She loves to sweat and keep her body in tip top shape for her fans.

SPICE UP YOUR DESKTOP 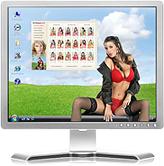